This is a picture of Arlon 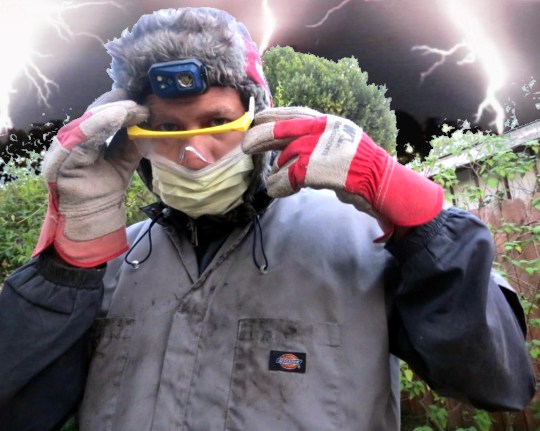 I've done lots of stuff but the most important is AccountBlaster http://accountblaster.com It has a free version anyone can use any time to help get their accounting done in a freestyle way with a colorful visually exciting interface. It works how you want it to work, you set up your own accounting accounts and transfer money around however you want to mirror what really happens in real life. When you're done you know how much money is where, see the list of why, and then you can find and fix discrepancies. All reports come out colorful, unique and nothing like any accounting software you've ever seen. It pretty much creates random (but customize-able) art to match and go along with displaying your accounting data, just to keep your attention, and whoever you are showing it to, while you do what would ordinarily be just boring old accounting. It definitely beats spreadsheet accounting, for lots of reasons, but especially the linked transactions and ability to do an arbitrarily large amount of accounts simultaneously with any arbitrary setup you create, also for the art that comes along with it. 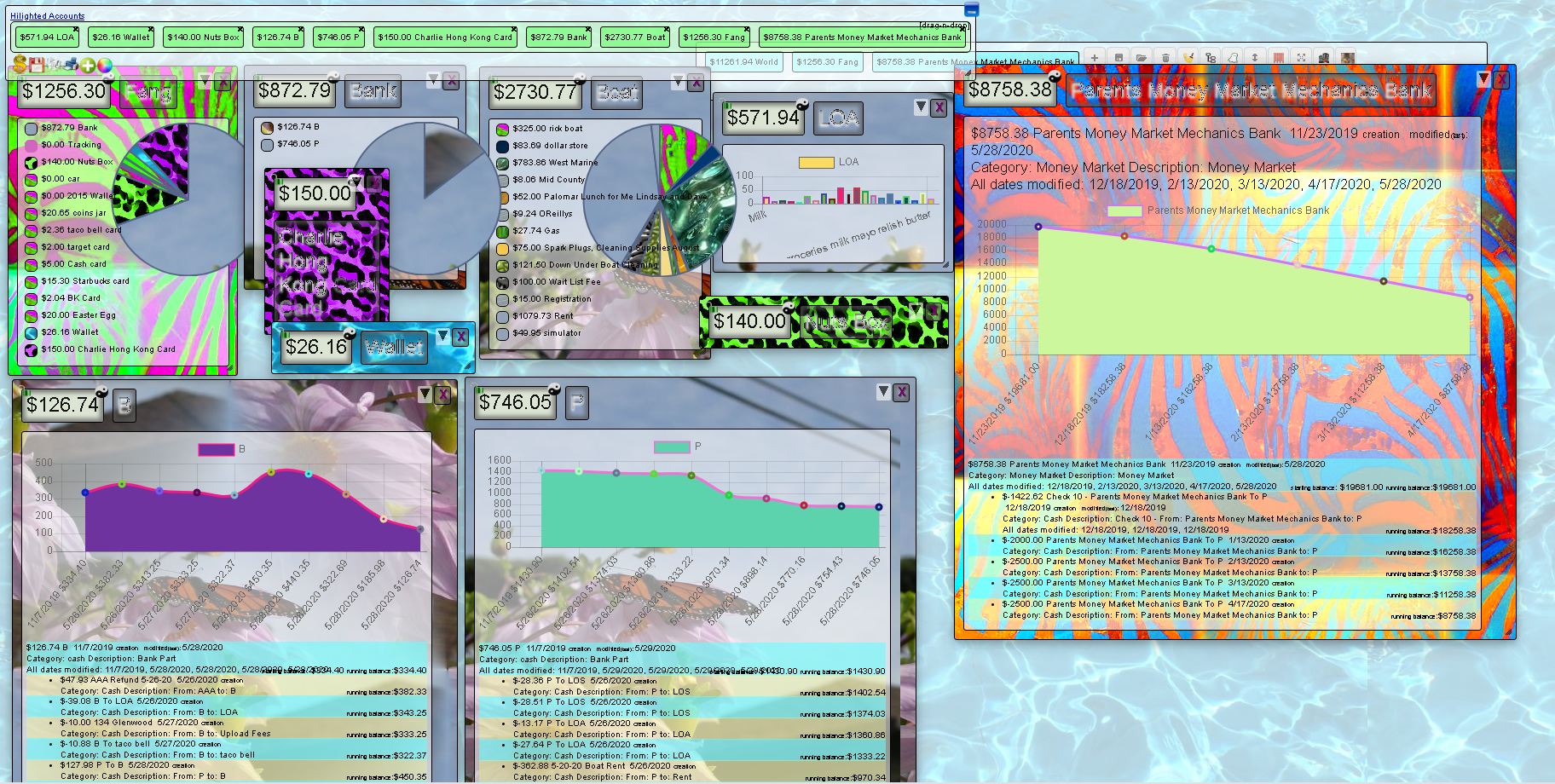 I also made AppraisalBlaster to help me at my dead ended 'real job': Screenshot: 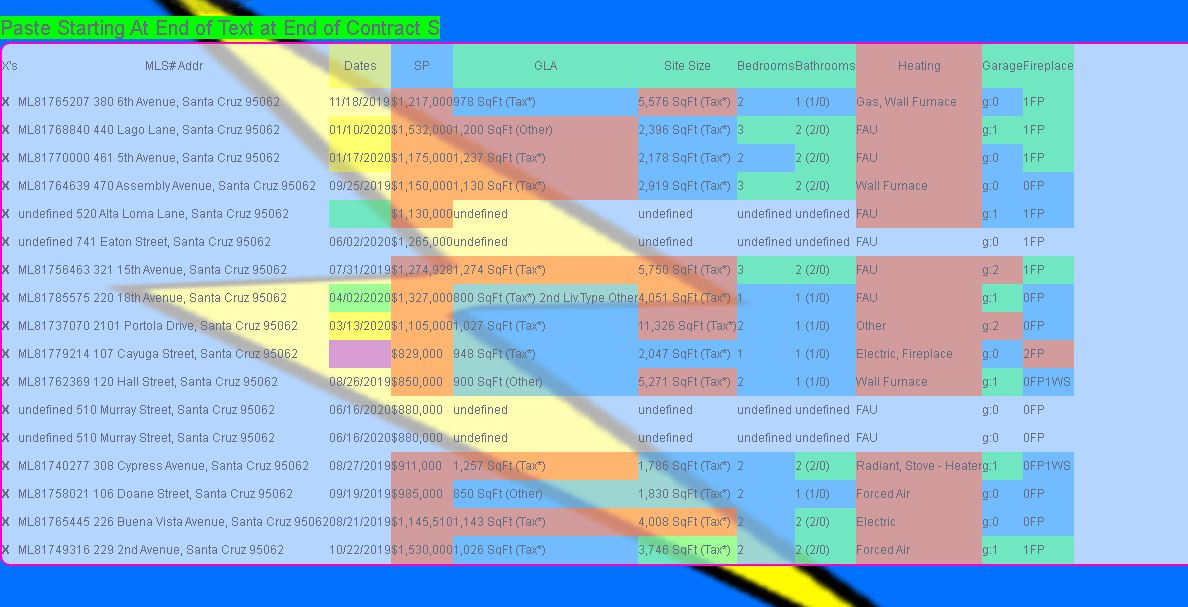 (That's my top secret interface nobody's ever seen before so don't share it.)

Before I made AppraisalBlaster I had made CompBlaster to collect and type lots of data onto my reports for me: Screenshot: 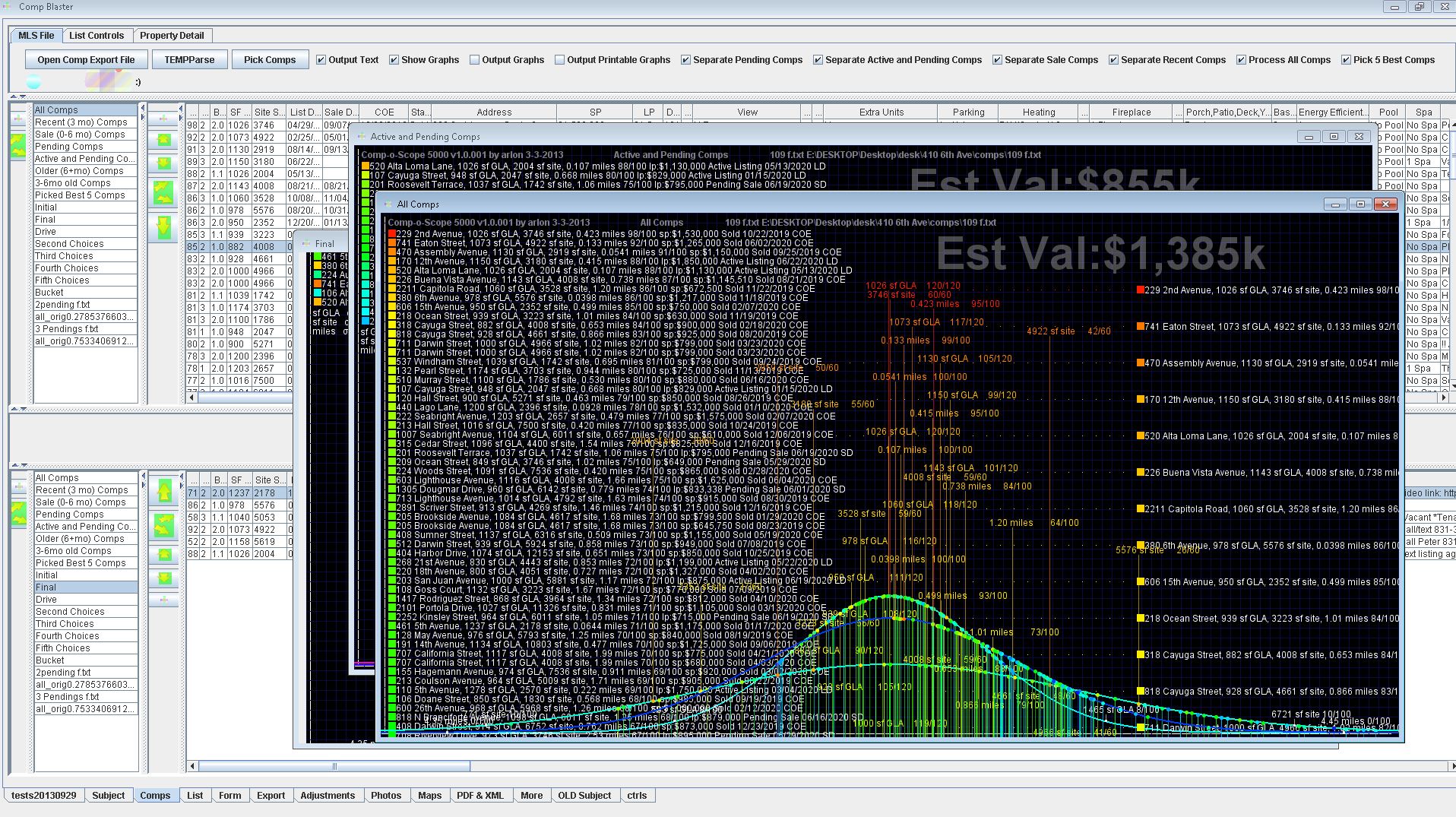 (That's also another top secret interface nobody's ever seen before so don't share it either.)

I figured it would be good to be able to make websites based on content based on photos in folders so I made WebBlaster to do that automatically: Screenshot:

That's Santa Cruz Abalone Works, built with my WebBlaster program I made for building sites like that automatically.

It's not up right now but for years I had the worlds best reversi tournament app and only beeversi app, Super Bomb Reversi Screenshot:

Facebook changes the interface quite often and I have lagged behind to the point it's currently not operational, but it will be again.

Real estate appraisers have to type a lot of repetitive nonsense so I made CommentBlaster to do that for me automatically: Screenshot: 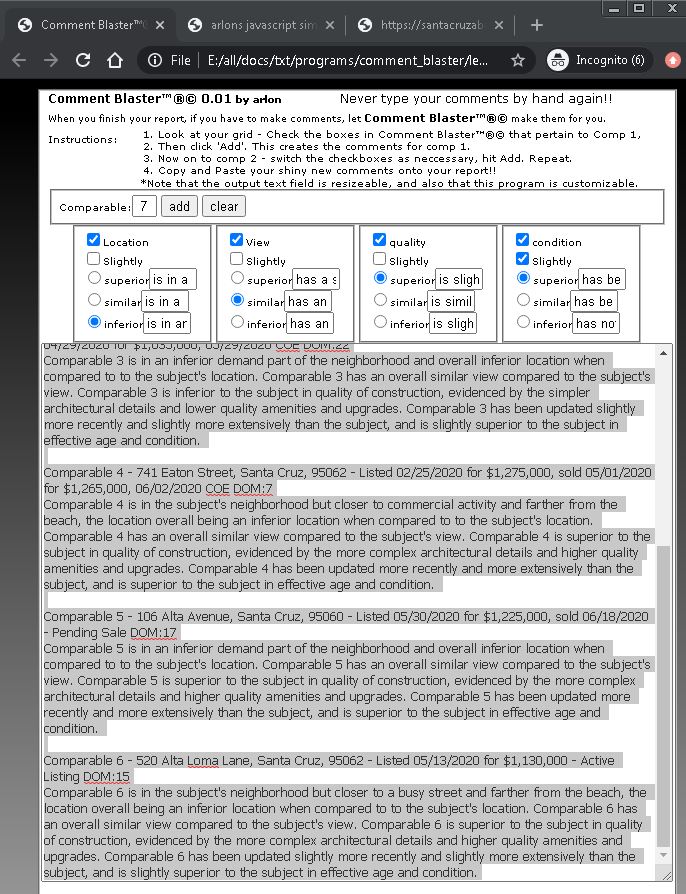 Thousands of dollars in reports these comments have seen - this is about 9 year old software, gone through hundreds of real estate appraisals. No other appraiser has it. They all actually type this stuff, well, a sloppier, more abbreviated version of something like it anyway.

I started programming when I was 12 because it was fun, with HyperCard, quickly turned it to 'game solving' assistance (fools errand puzzles+HyperCard) which turned into a paper route tracking program and that morphed into an extremely childish and barely functional very first version of AccountBlaster when I was a kid. The concept stuck with me and after several random versions throughout my life I made using Java I finally made the finished one which is now published using Javascript during the year of 2016.

I began college in 1994 as a physics major at Cal Poly San Luis Obispo but I think my brain was not ready yet so I made the enormous mistake of dropping out in 1999 to 'be an appraiser' and have been doing that ever since with programming as not only my favorite hobby but also as a robot assistant of sorts, across many projects. I always tell my friends and family I can help automate things for them but nobody ever takes me up on it so almost all of my programs I've written for my own use, except in the case of Super Bomb Reversi which almost caught on, and AccountBlaster which hopefully will, once it's discovered. I personally use it daily to get all my accounting done really clearly and quickly in a non-boring visual blast of art-accounting (see screenshot above). Not only accounting but you can use it for inventory. Like say you never can find your something, I dunno, for me it's my social security card. I never know where it is. But you can mirror reality with accountblaster, put it in a virtual tree of accountblaster accounts that labels its location so you can just search it later to find out where it is.

I almost forgot to mention two of my very favorite programs. I have one that plays minesweeper! Windows XP minesweeper specifically. It uses java.awt.Robot https://docs.oracle.com/javase/7/docs/api/java/awt/Robot.html to read in the screen pixels for Windows XP minesweeper and then actually clicks on the safe squares for you so you can just click 'click safe' and repeat and it flies through it. It can beat the human world record minesweeper player but there are lots of other minesweeper solvers that can beat it, it's not unique. It's unique in that I made the interface and the solver but other people have made other solvers similar to it. Actually I'm not sure if the other ones read in the board and actually click on it. My dad used to play Windows XP Freecell (a solitaire game) so I made a 'solver' for it - that worked - but this one was interesting because is was where my programming skills fell short - I made a recursive solver that looked at every choice possible and could solve the board from any particular place - with infinite memory - but with normal memory, because it was such huge tree of possibilities - you have to 'help' it so it doesn't work, per se, like, solve the whole game - it only works for 'short' move sequences. That program also used java.awt.Robot to read in the cards off the screen! And there is only one pixel difference from two of the cards - I forget which two - but it looked like they were the same, but the java.awt.Robot picks up the difference and can map out the whole card layout into memory that way, even though the cards 'appear' hidden, that one pixel saved the program and let it be able to work.